In the 90’s if you lived in the center of the country like me, it wasn’t always easy to find cool new music. Basically, I would go to the record store and hope to stumble across something good. Sometimes, when I could tune the station in, I could catch a radio show that was on from 10PM to 2AM on Sunday nights. It was called Off the Beaten Path and was hosted by chick DJ extraordinaire Mary of the Heartland. (I heard Smashing pumpkins Gish for the 1st time on her show. Thank you Mary) So, I was stuck in a sort of “New Music Black Out”.

That was until, for a glorious 3-4 year period in the mid 90’s, the music that I listened to stood up front and center. So called “Alterative Music” became so popular that there were actually radio stations playing alt music exclusively. This was a great time for me because I didn’t even have to try to find new music. It was thrust upon me. Back then it was normal to hear The Cure, Beck, The Jesus and Mary Chain and Jeff Buckley in the same block of music. That’s right! On the radio! Like my youth and my beautiful head of hair, I thought this era in music would go on forever. But as they say, “all good things come to an end”. And boy were “they” right. I should have seen it coming. There were signs that the end was near. I just chose to ignore them.

Sign #1. I’m King of the World! I was listening to a great alt station in Ames, Iowa. They had just wrapped up playing a Foo Fighters song and immediately ran into that iceberg of a song from Titanic.  My heart briefly stopped as “My Heart Will Go On” played over the stereo. Right there I should have grabbed onto anything that would float because this alt rock ship was sinking fast.

Sign #2. Lilith Fair and The Bare Naked Ladies. I was living in the Twin Cities area and found a great alt radio station. After enjoying a Ben Folds 5 song they announced that they have a new “house band”, The Bare Naked Ladies. They then announced that they were helping to sponsor a little estrogen fueled music fest called Lilith Fair. From then on you couldn’t go 20 minutes without hearing “Chickity China, a Chinese Chicken” or that song from Dawson’s Creek.  Yet, I still couldn’t bring myself to turn off the radio. I was still clinging on. Hoping things could go back. That is until…

Sign #3. Mandatory Metallica. When I moved back to Iowa the local alt channel had a gimmick called “Mandatory Metallica”. They had to play at least one song by Metallica once an hour. (Why? My theory was Lars had the DJs strung up by their balls above a pool of sharks. If they didn’t play a Metallica song once an hour they were slowly lowered into it)  I never really disliked Metallica but this mandate was a bit much. Try sitting through the “Mandatory Metallica” and “2 for 2sday” combo then see where your sanity lies. So this is where I flipped the radio off.

For a few years I wondered aimlessly through the aftermath of what I called “The New Music Wasteland”. Eventually technology rescued me with the invention of satellite and internet radio. But in the meantime I had to find alternate methods to satisfy my musical appetite. So, I did what everyone does in times of trouble… look back at a better time.  Here are a few examples of some artists I rediscovered during this time. Maybe this could serve as a guide if you ever find yourself stuck in your own “New Music Wasteland”.

Most of my friends are aware that for quite a long time my Prince listening habits bordered on compulsive. Not just Prince’s solo music either. All things Prince and Prince related. The Time, The Family, NPG, Martika, The Modernaires were all on heavy rotation. I always thought it was weird when guys would say “Prince? That dude’s gay”. He was linked to a different hot girl every week, his best songs were very sexual in nature, and his lyrics are clearly written from a hetero point of view. I recently ran across this picture. 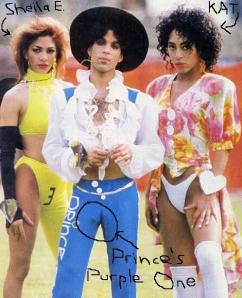 Now I get the confusion. The outfit is so distractingly androgynous that you don’t even notice the scantily clad Kat and Sheila E standing beside him. So if you can get past the strange fashion do your musical homework on Prince. Anything from 1978-1995. Doesn’t matter, it’s all A plus material and there’s a lot of it. The Purple One released an album every fortnight back then. 1996-Present, don’t bother, pretty much crap.

As soulful as it gets. This guy gets a lot of air time at my house in the fall and winter months. It is perfect for that time of year when it is either too cold or too wet to leave the house. Throw this album on when you want to stay in and hunker down with your significant other. Pssst… by hunker down I meant make “The Sex”.

Every music fan has gotten into the Beatles at some point along the way. I spent a lot of time in the “New Music Wasteland” re-listening to The Beatles catalog. My favorite Beatles song happens to be “Don’t Let Me Down” and it is on this record 1967-1970.

The reason I am showing it to you now is that I recently lost a wager involving that song. I bet a certain other pop culture blogger (Chris) who shall remain (Chris) nameless (A-hole) that “Don’t Let Me Down” was on the album Let It Be. The other nameless blogger claimed that it was never released on a major record but was instead the B side of “Get Back”. Now, I have heard that song a million times and was very confident in my knowledge that it was on one of my albums at home. So I brazenly offered up a recently purchased ticket to an M83 concert if I was wrong. Needless to say, bloggy blog man is getting a free ticket to M83. I had heard the song a million times but not on Let It Be. It was on this stupid fucking greatest hits record. Is there a moral here?

Know your Beatles Trivia?   No, that’s not it.