If My Bloody Valentine’s visual and sonic bonanza at the Aragon Ballroom is the last concert I attend this calendar year, it is the perfect cap to 2013. This trip around the sun gave me my third Cure show (at my first Lollapalooza in 19 years), a bucket-list cross-off (Sigur Ros), a “hi-how-ya-doin-great-show” moment with Bethany Cosentino at the Deadwood after a Best Coast show, a proper rock show by the Thermals at the Mill, a festive Wild Belle show at Gabe’s, and my son’s first concert, Vampire Weekend in Kansas City.

What a year. And what a show MBV put on for the Aragon faithful. And thank God, because since the day I bought these tickets, I had this small but nagging doubt that this band would be able to live up to the unbelievable standard set on the albums and EPs. Anyone’s who checked out live clips on YouTube might have the same anxieties. (As you might detect from my iPhone videos below, the camera phone probably isn’t sophisticated enough to accurately capture the pleasant onslaught on the senses.) I also had been experiencing so much joy from the anticipation of the event, I feared that perhaps I was setting myself up for a letdown. 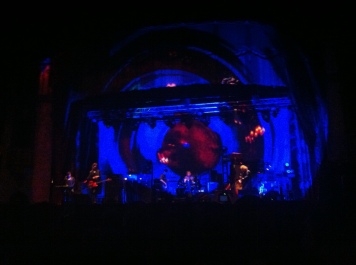 Bottom line: can the MBV experience really pay off in a live setting?

The answer is yes. No, it isn’t as precise and multi-textured as what you find on the studio output, but the spirit is still there. Gorgeous and lush, dreamy and dense, and, of course, loud as fuck. They still pass out earplugs at the door, with signs strongly encouraging everyone to use them “given the extreme volume of this particular artist” (I’m paraphrasing, but I think that was pretty close to the actual language). I kept them out until the last three songs; I think my friend Kory was the only person in the building who didn’t use them during the finale. (More on that later.)

So our gang of six (me, Kory, Nancy, Denise, Sam, and Travis) had a drink or two at a nearby bar, where I had blue balls.

Where I ate blue balls.

(Wait, that doesn’t sound better at all…)

Where I ordered a concoction that involved shredded chicken, peppers, and spices, all shaped into four spheres that were hand-breaded and fried, and then served over a bed of Maytag blue cheese dressing. This menu item was called “[something] [something] blue balls.” I ate those things. They were delicious.

We entered the Aragon and snaked our way toward the stage as best we could. After a relatively short wait, the “mbv” logo from the new album appeared on the backdrop, and soon enough the house lights went down and out came the shoegaze legends. Well, most of them, anyway. So Kevin Shields starts strumming the opening part of “Sometimes” (a song I always thought was just an OK My Bloody Valentine song until Sofia Coppola used it to perfection in Lost in Translation). Debbie Googe was going to work on the bass and…well…um, someone else was playing a guitar.

And as someone with a minor crush on Bilinda Butcher, I really wondered what the hell happened to Bilinda over the past few years to end up looking like the drummer, Colm O’Ciosoig.

Until I realized it was O’Ciosoig, strumming away on a song that didn’t require his drum work. Whew.

Bilinda soon surfaced and we were off, bouncing around the catalog a good amount before the night was over. Naturally they played a good deal of Loveless (seven of the 11 songs), and five off the new album. We got three from Isn’t Anything (including one of my favorite songs from that album, “Nothing Much to Lose,” with its frenetic drum fills and guitar squelches bookending the nice verses and bridges) and a couple of songs from the EPs (“Honey Power” from Tremolo and “Cigarette in Your Bed” from You Made Me Realise).

Highlights? “Soon” was definitely cool, and was one of the renditions that probably came close to replicating studio sound. “Only Shallow” delivered, as Debbie just pummeled her bass throughout that one. I thought all the m b v songs sounded great; I was very happy to hear my favorite song from the album, “wonder 2,” and came away loving “only tomorrow” even more after hearing it live. That’s something that deserves mention: the new songs all sounded GREAT live. Really, there wasn’t a bum song in the whole bunch, and as you might note from the pictures, the visuals projected on and all around them were a nice complement to the performance. I especially loved the look during “To Here Knows When,” which you can watch below.

About the only thing that was a bit unpleasant was the way the crowd would become restless between songs. To be fair, there were noticeable gaps between songs as they prepared for each tune, but not everyone was equipped to handle the “uncomfortable silences.” In the video below you can see what I mean in terms of gaps; I hit record about the time I figured the song was about to start, yet I end up with 30-some seconds of nothing as my intro.

But let’s get to the finale, “You Made Me Realise,” infamous for “the Holocaust section” at song’s middle. When you hear the studio version of this song, there is a nice guitar riff intro and a harmonizing verse, a return to the riff, a second verse, the riff, a brief solo of sorts, and then about 45 seconds of repetitive guitar distortion and static and whatever else that builds and builds and then releases back into the standard riff, a final verse, the riff, and a crashing halt.

So live it’s pretty much the same thing, except that intense noise section builds and builds and builds for 10 minutes or so. For economic/fiscal nerds out there, think of the guitar/feedback/white noise in terms of compounding interest: each minute, it earns interest, with the interest earning interest and that interest earning interest, and so on. And while there’s nothing musically impressive about it, from a sonic standpoint it’s quite the experience. It becomes completely physical. (As Denise put it afterward, “I’m pretty sure that last song rearranged my internal organs. All of them.”) I wasn’t dancing by any means but I was grooving to it. The visceral response I had was impressive…almost as impressive as Kory eschewing the earplugs for the experience.

Eventually they crashed back into the main hook of the song, finished it out, and that was that. A band I feared would eternally remain on my bucket list, alongside the likes of Nirvana (argh) and the Beatles (born too late, of course), could now be written in “strikethrough” typeface. And it wasn’t a giant fail. At all.

2013 in live music is rivaling 2013 in record releases. Check back with Todd and me in December, when we tackle the impossible: cutting our favorite album list down to 20, and then ranking those 20 stellar albums. That’s a good problem to have.