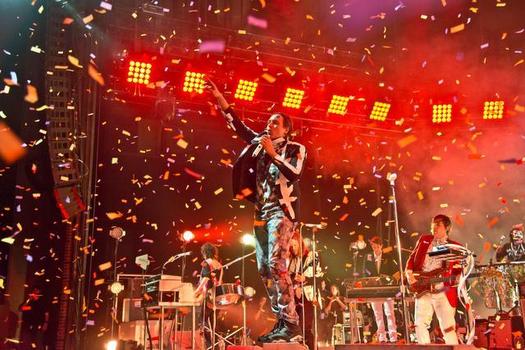 Last November I had the misfortune of having to work out of town for a few weeks in the frozen tundra of North Dakota. I had a nice 10-hour drive to collect my thoughts and listen to music. One of the albums I was listening to a lot then was Arcade Fire, Reflektor. It was while driving up north that I got the great news that Arcade Fire was going on tour. I pulled over and while freezing my beans off in my car I was able to scavenge enough cell signal to score a pre-sale password and purchase two pretty good seats to the show at the Starlight Theatre in Kansas City. It seemed like a million months away but the thought of an outdoor concert at the end of April helped warm me up as the first of many snowstorms to come covered my car. As the concert date got closer, Mrs. MoSSTodd (the owner of ticket #2) and I kept our fingers crossed for decent weather and a good show. Little did we know that we would get everything we wished for and more.

The weather was perfect all day before the show as we shopped for vinyl (stores were pretty picked over due to National Record Store Day the week before but I was able to snag a few treats) in the Volker Neighborhood, KC’s hipster district. The area was really buzzing that day. It seemed like everyone we chatted with was also going to the Arcade Fire show. The neighborhood was lousy with dudes in hillbilly beards and handlebar mustaches escorting their tattooed suicide girl wannabe girlfriends around the local boutiques looking for proper attire to wear to the concert that night. You see, in an attempt to make their concerts more fun and create a party atmosphere, Arcade Fire issued a dress code. The clothing requirements were printed on the tickets, “Please Wear Formal Attire or Costume.” We already had our outfits worked out. Let’s just say there was a lot of sequins and leather involved.

As show time approached, the temp was still a balmy 74 degrees and holding steady. We were set for a perfect night of outdoor entertainment with not a drop of rain in site. After we parked the car and started walking with the crowd to the theatre, it was apparent that this would be no regular old concert. It was as if we were all circus performers walking to the big top. I’d say that the vast majority of concertgoers chose to follow the dress code. While most people went with some version of formal attire, there were plenty of interesting costumes. You name it, we saw it:

The closer we got to the theatre entrance we could hear music getting louder. I just figured it was the opener, which I thought was going to be 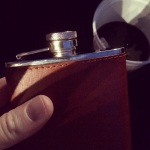 Baltimore musician Dan Deacon. We came a little late because I wasn’t incredibly interested in seeing him live. That’s when I started recognizing one of the songs coming from the stage. It was “Gangsta” by tUnE-yArDs. tUnE-yArDs was opening?!?!?! I grabbed the wife’s hand and we hurried though security (luckily they missed several mini-bottles of vodka and a flask full of rum stashed in my jacket pockets) and made our way down to our seats. My ears were not deceiving me as we confirmed this happy surprise. We caught the tail end of the tUnE-yArDs show and both of us were amazed at how leader Merrill Garbus created drum loops on the spot, and layered these with impromptu hand claps, ukulele, and vocals. This made for a very entertaining and danceable opening act. I just wish we could have seen the whole set. 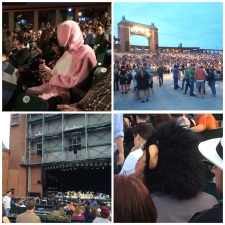 After tUnE-yArDs left the stage, the road crew started preparing for the Arcade Fire set and DJ Kid Koala spun some records to entertain us from a side stage. I thought this was a pretty original idea. It was a lot better than having to hear Nickelback or Kid Rock over the PA system. You could watch Mr. Koala do his thing live on the jumbo screen and listen at the same time. Dude was pretty amazing as he spun 2-3 records at a time creating some great beats.

Just as the sun went down so did the house lights. I’d done my research before the show and looked at several set lists from previous Arcade Fire shows. The opening song from every one I checked was the title track from their last album,“Reflektor.” That night they shook things up a bit and played “Here Comes the Night Time” first. Based on the setting they couldn’t have started it off any better. The song has a real party feel and further pumped up the already pumped-up crowd as we all sang the opening lyrics.

Midway through, giant cannons shot confetti and streamers over the entire venue and lead singer Win Butler urged the crowd to

move up and dance in the aisles if they wanted, “Just be friendly to security.” During a lull in the song Win addressed the crowd again saying, “We’re going to give you guys everything we’ve got tonight. You give us everything you have.”  From that point on the crowd including the Mrs. and I didn’t stop dancing until the last song.

They played a nice mix of new and old songs and kept things interesting by throwing in a few surprises. During the song “Afterlife” from the new album, a guy in a reflective costume mysteriously appeared on a stage that just happened to be a few feet away from us. The theatre lights shown down on him and he rotated like a human disco ball. Check out my short video below.

[In typical Todd-written MoSS? Pit form, my videos are less than great. I forgot to clear space on my phone before the show so I was unable to record very lengthy videos. I’ll get it right on one of these MoSS? Pits.]

During the next song Win’s bandmate and wife Regine came out to the same stage and sang “It’s Never Over (Oh Orpheus).”

Throughout the tour the band has been opening their encores with a cover song. Most times it has some association with the city they are located. In Minneapolis they covered a Prince song. This night they performed a cover of Kansas’ “Dust In The Wind.”  The band played on until Win cut them off: “Guys, that was really beautiful, but that’s a Kansas song and we’re in fuckin’ Missouri. That’s gonna kill when we play Lawrence, though.” Watch below courtesy of Stereogum.

They closed the show with the anthemic “Wake Up” from their first album Funeral. The perfect song to one more time unite the crowd as we sang along with the “Oh,Oh’s’ during the chorus and even more confetti rained down on us.

I doubt anyone walked away from this show thinking they didn’t get their money’s worth because as Win said at the beginning, “They gave us everything they had.” I hope the band felt the same about us.

One comment on “From the MoSS? Pit: Arcade Fire”