Look who’s back in the news! All over it, in fact.

In the last couple of weeks, Smashing Pumpkins frontman Billy Corgan has announced that he’s working on not one but two albums of new material, including one with Motley Crue’s Tommy Lee laying down the drum tracks.

He’s supervising the remastering and re-releases of deluxe versions of the Pumpkins’ Adore and MACHINA/The Machines of God, the latter in its original intended form – remixed and resequenced along with the internet-only release MACHINA II/The Friends and Enemies of Modern Music to finally realize its destiny as a conceptual double album.

He’s had his AMC reality show about professional wrestling greenlit. Hopefully it will be as entertaining as his wrestling-themed furniture store commercial:

And then, in case you’ve already forgotten, there was this:

Any self-respecting MoSS? reader knows that the Smashing Pumpkins breathe rarified air around these parts. In their respective lists of the undisputed greatest albums of all time, the Pumpkins were everywhere, so there’s no reason for Todd or Chris to explain that again when they already did it here. And here and here. And here. Oh yeah, and here.

For the record, since my only role back then was as a loyal reader, my top 5 undisputed albums of all time include the Beastie Boys’ Paul’s Boutique, My Bloody Valentine’s Loveless, Slayer’s Reign in Blood and I’d probably round out the top 5 with Led Zeppelin’s Houses of the Holy. OK, that’s four.

See, I can do that because my No. 1 album of all time is Gish AND Siamese Dream. I can’t separate them. One day it’s Gish, the next day it’s Dream. But they are interchangeable to the point I stopped interchanging them years ago and count them as a single entity. But if Chris and Todd would have forced me to choose at gunpoint, I would have put them at 1 and 2 and bumped Zeppelin. That’s right … I’d bump Zeppelin. That’s how much I love those Pumpkins records.

Now, in all honesty, all three of us, at one point or another, have fallen in and out of love with this band. I remember the day I bought Adore and loaned it to Chris before I even had a chance to hear it myself. An hour later, I asked him what he thought and he looked at me like I’d just cupped a fart in my hand and stuck it in his face. And I’m sure I probably made that face myself after I first heard MACHINA.

Years later, the strength of the post-breakup lineup (and their fine 2012 album Oceania) has me excited for what’s on the horizon. But no matter what the future brings us, the strength of the Smashing Pumpkins’ early catalog – starting with 1991’s Gish through their 1995 magnum-opus double album Mellon Collie and the Infinite Sadness – can always suck us back in.

Look at the finite catalog of, say, Zeppelin. Those first five records – I, II, III, IV and Houses of the Holy – are followed by a double album, Physical Graffiti. After Graffiti, the remaining catalog is really hit or miss. Some great tracks sprinkled around but the complete albums were not as strong. But those first albums and the double album? Near perfection (even with the liberal “borrowing” from the blues legends of the past).

Now … take Gish and Siamese Dream, the excellent rarities compilation Pisces Iscariot, the myriad remaining non-album tracks and B-sides from that era, and follow it with Mellon Collie … in the humble opinion of this Gen-X writer, you have a fair comparison. The later records have some excellent songs, for sure, but the complete albums don’t hold up like the first ones do. 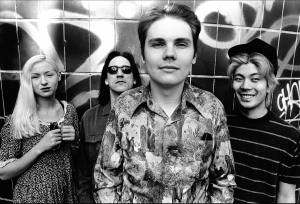 Let’s pretend the Pumpkins had died in a plane crash in mid-1995 (with Mellon Collie in the can but before it was released … hopefully, they’d have an Eddie Kramer-style overseer saying, “Hey, you know what? Let’s just release this as a kickass single disc instead,” which would have meant a second disc of material was still out there along with what would later become The Aeroplane Flies High box set of outtakes, ensuring years of Hendrix/Tupac-type posthumous releases). Leaving behind that above-mentioned songbook and recordings as their legacy, they might have been the greatest band of all time. At least in my book.

So, with the Pumpkins on the brain, the three of us decided to have a little fantasy draft, with each guy trying to compile the ultimate playlist.

Fifteen songs each. But certain criteria had to be met. Each guy had to pick nine songs fulfilling these requirements:

Then, after those requirements were met, there were six wild-card slots. Fill them however you like.

We all missed out on songs we coveted. Then again, there were a few songs that weren’t even on the other guys’ radars when they were picked. But even so, if I had gotten the five or so songs I missed out on, I don’t know what I would have bumped to fit them in.

In the end, it was astonishing that all three of us walked away thinking we’d won the draft. And when we looked at what was left on the board, we agreed that had there been a fourth person, it would have gotten a little dicier since, guaranteed, there was no way we would’ve have ended up with the picks that we did.

So once we were done, we did an impromptu pick’em with the remaining songs for a hypothetical fourth man at the table. Here’s how that ended up:

Notice something? Almost every single big radio and MTV staple the band put out was NOT chosen in the draft. And a few – such as “Bullet with Butterfly Wings” and “Perfect” – didn’t even make this “best of the rest” top 15 list. A stronger, deeper catalog than one might remember, eh?

All three of our drafts are tip-top. You can’t lose.

But still, I don’t think there’s any question that when you get a chance to analyze the results, you’ll agree that I won. Handily. And I’ll take the fuckin’ Pepsi Challenge with either of these clowns to prove it. Bring it on.

Come back to Music or Space Shuttle? on Monday, June 2, for the playlists and self-analysis of the draft. What song would you have taken #1? What song(s) in the “best of the rest” list above should have made one of our playlists? Sound off in the comments, or have your say on our Facebook page. Or yell at us on Twitter.

One comment on “The great Smashing Pumpkins fantasy draft: An introduction”