Editor’s note: Chris and Todd know this one guy named Sam who likes to talk about Music or Space Shuttle? type topics. Perhaps you’ve seen his comments under some of our posts (he’s “sambob25”). He wanted to write a couple of things for our blog. We agreed. Suddenly this love letter to face-painters appeared. We decided not to rescind access to our platform. We are nice.

OK, intro over. Please enjoy “Why I Love Kiss,” by Sam. Not Chris or Todd.

Have you ever realized how much Kiss has in common with the Beatles?

Get it of your system. I can wait.

OK, once you’re done laughing, take a minute to think about it.

Both bands had four guys – two guitars, bass and drums. All four guys wrote and performed their own material within said structure. All four guys, at one point or another, were the lead singer.

(While it’s easy to remember that every Beatle has a big hit on their résumé, one might not realize that every member of Kiss sang at least one Top 20 Billboard hit. Gene Simmons had “Rock and Roll All Nite,” Paul Stanley had “I Was Made For Lovin’ You,” Ace Frehley  had “New York Groove,” and Peter Criss had “Hard Luck Woman” … and some other song that was the biggest hit the band ever had. More on that later.)

Every guy had his own distinct personality within the band …

One had the Demon. The Starchild. The Spaceman. The Catman.

The timelines of the original bands even kinda line up. Yes, they had been around for a couple years beforehand in Europe, but America was exposed to the Beatles when they touched down in February 1964 for their historic turn on The Ed Sullivan Show. They broke up in 1970. Kiss released their first album in February 1974 (with a pair of memorable coming-out appearances on Dick Clark’s In Concert and The Mike Douglas Show). The original band ended with Peter’s exit in 1980.

Both had a dominating pair of songwriters fronting the band (Lennon/McCartney and Paul & Gene). But they also had a third guy providing solid material that resulted in a few hits. And when they were finally left to their own devices and made solo albums, the best ones came from those guys – George Harrison with All Things Must Pass, and Ace’s 1978 disc while he was still in the band, which was the best-received and best-selling of the bunch and produced the most enduring songs.

A Hard Day’s Night …
Kiss Meets the Phantom of the Park …
OK, scratch that one.

And both bands, at one point or another, could claim they were the biggest band in the world. The Beatles literally, and Kiss somewhat literally but mostly hyperbolically.

Now I realize my MoSS? brethren are already gasping for air behind my back. But come on, give me a break … I’m not comparing the musical legacy of Kiss to the effing Beatles. I’m well aware that the entire Kiss catalog is full of songs about nothing more than partying, being famous, and hunting trim. You put Gene Simmons in the same room as the Beatles and I’m fairly certain it would resemble something like Salieri hearing Mozart for the first time (and Gene’s pretty much said as much himself). But I can’t think of two other bands that had so much in common from a marketing standpoint and in terms of the trajectory of the original band.

But I will say this much and I’ll say it without shame: Kiss is MY Beatles.

My mother was 13 when the Beatles played on Ed Sullivan … and I’m pretty sure her knowledge of pop culture doesn’t extend past that day. I mean, this is the woman who, when I was kid, actually believed Kiss stood for “Knights in Satan’s Service.” Yup, she was one of THOSE. She handed down some pearls of wisdom, too … well, actually it was some wonderful talk-show nonsense I’ll never forget:

“Do you know what those devil worshippers do? They take poop and, and … pee … and blood … and they mix it together and, and, and … they eat it.” (I think she caught that gem on 20/20 or something.)

Oh, and my favorite …

“Lick It Up? What do you think? Lick up the drugs.”

Classic stuff. Makes me a little misty, because a child never forgets the moment when they realize their parents don’t know EVERYTHING. I was 10. Sigh.

But let’s give Mom a little credit here, too.

In 1978, I was 5. I didn’t know music from anything. I only remember listening to Barry Manilow 8-tracks in the car before that. But then I remember the dudes at the lake resort we used to visit every summer in Minnesota blasting Kiss in the bait shop. Then I remember wanting a Gene Simmons doll for Christmas. My brother wanted an Ace Frehley doll.

But we were not made of money. Wasn’t gonna happen. Mom bought us Rock and Roll Over instead. 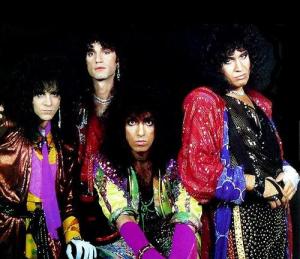 (I guess she hadn’t picked up on the whole devil worshipper thing yet … that didn’t come until after they’d taken the makeup off and they were about as threatening as the bunch of Golden Girls-lookalike drag queens that their ‘80s personas resembled. I told you she was a little slow on the uptake, pop-culturally.)

But I digress … I wore that record out. Literally. You should have seen how warped that thing was before it finally died.

And whether she knew it or not, buying me that record turned me into the music junkie that I became.

Eh, over this stuff. I need more. Give me some AC/DC and Guns N’ Roses. Metallica. Some Iron Maiden. Some Slayer.

Oh, you like Kiss? You should check out who influenced THEM. That’s when Led Zeppelin entered my life. That’s right … after Kiss. BECAUSE of Kiss.

It all led to the here and now, hundreds of concerts and thousands of records, 8-tracks, cassettes, CDs, and MP3s later. All because I liked Kiss first.

Because of Kiss, I became enthralled with MTV when I was 9 years old. We got it the last day I was in third grade and was so happy to have Martha Quinn in my life. That summer, I swear to God, I watched it for eight hours every single day. I found all this stuff that I didn’t know was out there.

I fell in love with the Go-Go’s and the Pretenders.

I saw Duran Duran and thought they were the coolest chicks I’d ever seen. (I’m a good sport, leaving this in. —Chris)

Seeing the video for “Sunday Bloody Sunday” that was filmed in what looked like the side of a mountain.

I saw a video called “Let’s Go to Bed” by weirdos called The Cure. There were bands out there like THAT?

I watched a show called IRS: The Cutting Edge (i.e. the precursor show to 120 Minutes by more than a decade) and saw this band called R.E.M. sing “So. Central Rain.” It wasn’t my cup of tea (at the time), even though a college guy whom I idolized while helping out in the elementary school library that summer told me they were “it” (his opinion mattered because he was a Kiss fan when he was my age, you see). Again, I was just 10.

Oh, and let’s not forget Michael Jackson. And Prince.  And a girl named Madonna, writhing on the floor with her wedding dress coming up over her head during a live performance when I was 10 years old. Let’s just say I didn’t care much about G.I. Joes after that (my mom’s legendary response that night? Very succinct … “She’s naughty.”)

I got all of that from MTV. And despite all of that, the real reason I was actually watching it all day every day was for the outside chance I might finally catch “Lick It Up.” No lie.

I love Kiss. I have for as long as I can remember having conscious thoughts. Because of them, I love music. They were my gateway drug to everything cool. Because once I started spinning that one record on my tiny Fisher-Price record player as a 5-year-old, I went through a worm hole I never want to be rescued from. 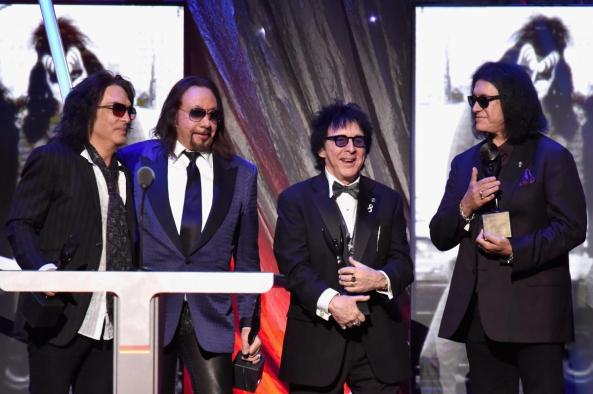