Sleater-Kinney at Slowdown in Omaha, February 13

Last weekend, I went to St. Louis to see Sleater-Kinney. Got a hotel room at the Moonrise, right next door the Pageant, where the show would take place in about four hours. Went to grab a beer in the hotel bar. Since it was just after 5 p.m., the bar had just opened, so there were about 10 people in the joint.

And in walks Carrie Brownstein.

My buddy Dub is saying, “well, go get your damn picture already, dumbass.” I said no. Didn’t want to bother her. Even when she got her drink and walked RIGHT PAST ME SIX INCHES AWAY (I mean, it wasn’t like she was 50 feet across the room), I didn’t tap her on the arm and say, “hey, I just wanted to tell you how much I love your music.” I let her sit and enjoy a drink with her friends before a gig. That’s what I assumed she’d want.

Yeah, I’ve regretted it for three days now. I should have said this …

Wait, let’s come back to that.

One of my favorite things about music is when you like a band – maybe you don’t love them yet, but you know they’re good – and then you go see them for the first time and they absolutely blow your friggin’ doors off. It’s like hearing them again for the first time. 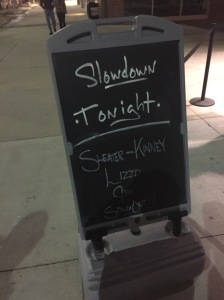 That’s what it was like when I saw Sleater-Kinney in Omaha two months ago.

I’d been a fan since the late ’90s, introduced to them by MoSS?’s own Mr. Chris, himself just coming out of his stint as college radio DJ. Working late and rocking out one night at our post-college entry-level newspaper jobs, Chris slid over a copy of Dig Me Out and said “put this on.” You gotta remember, it was a dark time musically, and being trapped in central Iowa in the years before the internet truly grabbed hold, you still had to find your music organically. I had just graduated from Iowa, so the cool alternative bands weren’t as readily accessible anymore once I left my safe musical cocoon of a college town. And unfortunately in central Iowa at that time, all you had were butt-rock FM stations and the popular music dominating MTV had shifted toward Britney Spears, boy bands, and Limp Bizkit.

Also, anyone who knows me knows that my favorite thing in the world is a girl with a guitar. It’s almost become a running joke. I think there’s nothing sexier. I loved the Go-Go’s and the Bangles when I was a kid. Joan Jett. Lita Ford … imagine my surprise when I realized those two were actually in a fucking BAND together at one point. Score. Love.

So when I heard Sleater-Kinney? Let’s just say I liked them a real lot.

But I never got to see them until Omaha. Missed them altogether before 2006. Never really had a chance the first time around. So when reunion tour dates were announced? I just bought four tickets. Didn’t ask anyone. I hadn’t even heard No Cities to Love yet, either. I just figured that this is one of the ’90s bands I had never gotten to see. Time to fix that. I certainly wasn’t geared up to be floored. 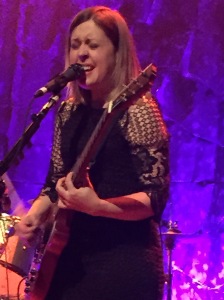 Corin Tucker getting into it

Everything about that show was perfect. The venue, a club called Slowdown, was sold out, but it wasn’t too crowded. Hit the floor with Chris and our friends Michelle and Jim and set up in front of where we knew Corin Tucker would be standing (of course, I was gonna stand in front of Corin Tucker).

Then they hit the stage. Wow.

That place just sounded phenomenal from where I was standing. Can’t recommend it enough in the future (check it out … Slowdown). The setlist was on point, too, with a heavy dose of the new album (which is perfectly fine when your new album immediately vaults into the “best album in your catalog” conversation upon release). But they didn’t forget to play “I Wanna Be Your Joey Ramone” or yes, “Dig Me Out,” either. I can still see Chris bouncing up and down, singing “Turn it On” just like he would have when we first met in 1997.

But it was the band themselves that sticks with me. The ladies harmonizing perfectly – Carrie’s voice a little more girly, with Corin’s killer staccato, equally elegant yet perfectly harsh. The staggering riffs and sheer musicianship. I mean, I played drums until I was 15 when I inexplicably quit. Maybe my biggest regret in life. And if I’d stuck with it, I might be HALF as good as Janet Weiss. And let’s not forget the showmanship – love those high kicks, Carrie Brownstein!

So like I said – you like a band a lot, then you see them live and they blow your friggin’ doors off. Then you LOVE them. These days, Sleater-Kinney is pretty much my favorite band. And they aren’t just girls with guitars. Fuck that. They’re the best rock band on tour in America right now. Go see them. Like, right now. 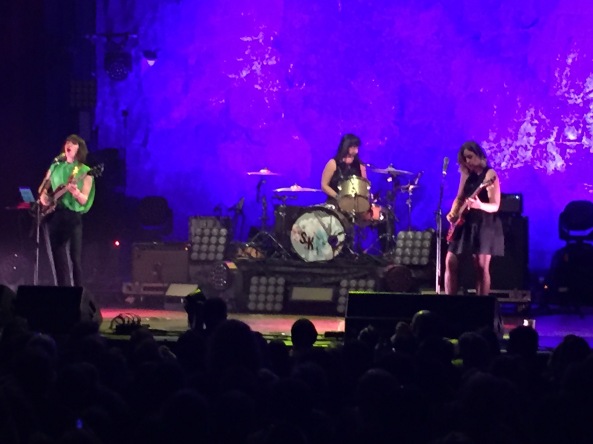 Sleater-Kinney at the Pageant in St. Louis, April 24

As soon as I saw they were playing in St. Louis, I wanted to go again. Always heard good things about the Pageant. Plus, one of my oldest friends who lived in the Lou was soon to be moving to Brooklyn. Might not have a chance to go visit again, so I shot her a text and said Sleater-Kinney was playing at the Pageant on April 24.

She simply answered, “I would be super into that.” That was all I needed. Bought four tickets without asking for permission. Luckily she could go.

Last weekend was more about socializing, catching up with old friends. But I’m sure Lisa would tell you that once the band started, I ignored everybody. I remember vividly telling Lisa’s husband that if the ladies were in good voice that night, we were in for a treat. They were. And this time, I got to hear “The Fox” and “One More Hour.” And I NEVER get tired of hearing that riff in “Jumpers” … you know, the one right after the second chorus? Killer.

But the thing I think I’ll always remember is having the chance to talk to Carrie Brownstein and not taking it. In addition to just telling her how much I love her music, I might have told her this something like this:

My buddy Dub has a 9-year-old daughter. She just started playing the violin. And like most 9-year-olds, she’s already getting a little bored with it. Being the guy that I’ve been since I was her age, when I was obsessed with Kiss records and early MTV, I’m praying that she stays with it (like I didn’t with the drums and now regret), that she gets inspired to play … although I must confess, when I first heard she had chosen the violin, I asked Dub, “if she’s gonna play strings, why didn’t you steer her toward cello? Because then, she can eventually pick up a bass guitar?” What a wonderful parent I’d be!

Anyway, my first thought was this: I wish Sleater-Kinney was playing in Des Moines that night, not Omaha or St. Louis. Because I totally would have tried to talk Dub into letting me take his 9-year-old daughter to see Sleater-Kinney as her first concert. Because seeing these three powerful women on stage – who have become the best rock band in America – might inspire her. And as she gets a little older, she might have gained the skill set to put down her fiddle and pick up an electric guitar. And then she can be Carrie Brownstein.

That’s what I would’ve said to Carrie Brownstein if I had another chance.

Also, forget inspiration for a second – I’m just pretty sure a 9-year-old girl that’s as up-and-coming cool as my buddy’s daughter would eat up “Little Babies” and “Oh!” and “Modern Girl” with a spoon.

Fuck it, where’s my phone? I’m Facetiming her right now and telling her to get on YouTube …

Let us know what you think. Sound off in the comments here at Music or Space Shuttle? Have your say on our Facebook page. Yell at us on Twitter.

Side A: Todd’s Picks

Side B: Chris’ Picks