The other day I was at the Music or Space Shuttle? headquarters or “Launch Pad” as our MoSS? staffers often call it. I had a bit of blog writer’s block so I responded to the hundreds of comments we get on our posts. A few hours and several witty comebacks later, I noticed a package sitting on my desk under a pile of discarded MoSS? mix tapes. It was addressed to:

I was intrigued. Rarely do we have actual mail arrive at our HQ and very few people know the address of said secret lair. (Not so secret anymore I guess) Inside was a dusty old VHS tape simply labeled “99.9F°”. This not being the year 1989, MoSS? HQ didn’t have a VCR to play the tape. So I shrugged my shoulders, tossed it into the trash and continued on with my mindless internet surfing.

As I carried on with my “work”, my mind kept coming back to the tape. I started thinking about the cryptic title, 99.9F°, and what it could mean. Eventually, my curiosity got the better of me and I dug the tape out of the trash. Where could I get a VCR in this day and age? Then I remembered that one of our neighbors at the business park was Ted’s Technology Barn. I always felt bad for old Ted. He doesn’t get a lot of customers anymore. People walk by his store all day long but rarely go in. With each potential customer he looks up with eyes full of hope. His excitement turns to disappointment time and time again as customers pass him by.

In the late ‘80s and early ‘90s, his store was at its most successful. This was the heyday of the video cassette tape. He thought the good times would never end and spent his entire life savings on an enormous shipment of VCRs. Business Park Legend has it that the day after he bought the shipment, the DVD player was unveiled. Within months his sales started declining. Having spent all his money on VCRs he couldn’t stock his shelves with the DVD players that the public demanded. He gambled on analog technology and lost. At least he took a shot. Since then, he has struggled as an electronics dealer, always seeming to have the wrong products.

I went next door and asked if he still had a VCR. He giggled hysterically and pointed towards the back of the store. Most of Ted’s store is like a museum for outdated gadgets. The shelves are lined with Apple Newtons, Microsoft Zunes, Rio MP3 players, Nokia cell phones, and Sega Dreamcasts all in their boxes waiting to be sold. He steered me towards the back room where he still had dozens of VCRs stacked on pallets. I asked Ted if I could borrow one of his VCRs but he wouldn’t let me. I had to purchase one. The price was one for $1000 or (as luck would have it) there was a sale on VCRs that day, ten for $1. I guess Ted was trying to clear out some inventory. I didn’t want one VCR, let alone ten VCRs, but had to know what was on that tape. So, I gave Ted four quarters and went back to the office with ten VCRs in tow. I blew the dust off of one and hooked it up to the break room TV. This is what I saw.

At first I thought,” She’s back! That evil pixie Suzanne Vega is trying to make another attempt on my life.” In earlier posts, we learned that Suzanne Vega was using her awful music as mind control to take over the world. She struck first with the song “Tom’s Diner”. I was able to stop her on my own that time but needed the help of shit rockers Third Eye Blind when she struck again with her song “Luka. After all that, I thought we had seen the last of Suzanne Vega. I was wrong. She must have mailed me this tape before our last showdown as a last ditch attempt to take me down.

I went to turn the tape off before the song could get stuck in my head. That’s when I noticed something different about this video, Suzanne Vega looked kinda sexy. I couldn’t turn it off. The song had a really nice groove to it and everyone knows that I have very little will power when it comes to alluring brunette women. Pretty soon I was actually enjoying the song. “How could this be happening? Is Suzanne Vega’s music good? What if other artists that I had labeled as awful are actually good? Everything I’ve ever listened to is now suspect. Dear God…is Don Henley good too? No… It can’t be. What have I become?!!”

Soon, I collapsed to the floor as the 99.9F° lyrics were swimming through my head.

Pale as a candle
And your face is hot
And if I touch you
I might get what you’ve got
You seem like a man
On the verge of burnin’
99.9 Fahrenheit degrees

My head felt like it was on fire and I was certain I was dying. She hooked me in again knowing I couldn’t resist her sexy song stylings. I had to stop the tape or the fever would kill me. As I reached for the player, the 20 year old stop button broke of in my hand. Damn you Ted! The song continued…

You seem like a man
On the verge of burnin’
99.9 Fahrenheit degrees

With no way to stop the video, I gave into the song and thought,” You’ve finally defeated me Suzanne Vega. Well played you dirty bitch.” I lay down on the floor as the life drained from my body. By the song’s last chorus, I was ready to accept cool cool death.

You seem like a man
On the verge of burnin’
99.9 Fahrenheit degrees

As my last few breaths were about to leave my body, I heard music far off in the distance. It was the song “Terminally Chill” by one of my favorite chillwave bands, Neon Indian.

I thought that I was hallucinating but felt thankful. If I had to die, at least the last thing I heard wouldn’t be a Suzanne Vega song. Neon Indian’s chillwaves continued to fill the room and I began to feel better. Soon my fever broke and I became aware of my surroundings. The music was actually my cell’s ringtone. I picked up the phone. It was Ted from next door.

Ted: “Hey, thanks taking those VCRs off my hands. “I have like thirty copies of Big Trouble in Little China on tape back in the storeroom. How about 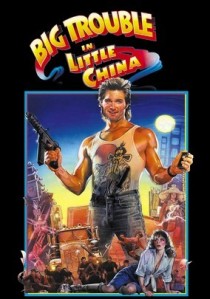 I bring one over after I close up shop?”

Normally, I wouldn’t want to hang with Ted (he’s kind of a downer) but I felt like I owed him one. If he hadn’t called me when he did, I wouldn’t be alive to tell this tale.

Me: “Bring beer too”

So what’s the moral to this story?

To (sort of) quote the character Jack Burton from the aforementioned awesome ‘80s movie:

“When some wild-eyed, five foot tall musician chick grabs your ear, sticks a song in your favorite head until you want to die, and she looks you crooked in the eye and she asks you if ya paid your dues, you just stare that bitch right back in the eye, and you remember what ol’ MoSS? Todd always says at a time like that:

“Have ya paid your dues, Todd?”