My job sometimes requires me to spend a lot of my day in the car. I don’t mind too much. It gives me time to think, reflect on my life and most importantly listen to great music. On these trips I sit back, relax and turn up the tunes. After many hours alone in the car though, I tend to have quite a few random and moronic thoughts. These are just a few of the revelations I came away with on the road.

No Sir, I Will Not Honor Your Thumbs Out Gesture 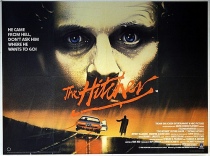 I drove past a freezing cold hitchhiker today. He seemed harmless enough. Clean-ish clothes, presentable face and a not too worn backpack. I thought, “Man what a shitty day to be stuck out in the cold. The guy probably had car trouble and just needs a ride to the nearest town.” A co-worker of mine tells me stories all the time about picking up hitchhikers. He thinks it’s fun and good for a story or a laugh. So I think, “It would probably be fine to pick him up.” Then I remember that I have an irrational fear of hitchhikers, road weathered tramps and Rutger Hauer. That’s right. The Evil Rutger Hauer. This all stems from when I was 11 and watched the movie, The Hitcher, starring a post-pubescent C. Thomas Howell and, of course, The Evil Rutger Hauer. That dude is just plain scary. Check out this scene if you dare.

He’s like a more determined version of The Terminator, an unstoppable killing machine. There’s a scene where he draws and quarters C. Thomas’

love interest with semi-trucks. Terribly disturbing for a young lad like myself. The Evil Rutger Hauer was in another movie called, Surviving the Game, where he was equally as sinister. In this one, he plays a rich dude that holds an annual hunting excursion where they hunt homeless people…you know hitchhikers and such. One might think that after The Evil Rutger Hauer created my fear of hitchhikers in The Hitcher, I would root for him as a hitcher-killer in Surviving the Game. No way. I’ll not get fooled by your crafty evil beguiling ways. Plus, I’m not looking to get stabbed to death by some psycho mobile hobo whose only fear of death is that he won’t be the cause of mine.

I have written many times on these road trip posts that I love my satellite radio. Great content, no commercials and minimal DJ babble. My radio is portable so I hook it up to the car stereo using an FM modulator. I pick a nice unused radio frequency and I’m like a mobile broadcasting force. Sometimes I drive by other commuters that are doing the same thing. They come up from behind me and I hear a little static then maybe a hint of another song or talk radio station. Occasionally, these cars completely wipe out my station altogether. More times than not, when I hear that static noise, my radio overpowers the

other cars radio and wins the battle for the airwaves. I love looking over to the car next to me and seeing the confused and irritated driver. The irritation continues until they get outside my 100 sq ft broadcasting range. This morning I heard that familiar static sound as an SUV pulled up beside me. I had my radio tuned to Sirius Alt-Nation and was enjoying the Foo Fighters song “No Way Back.” That song started to fade out as the car came up beside me. The ‘80s gem “No One is to Blame” by Howard Jones fought its way from the SUV radio into my car radio. The lights in my car dimmed and the engine revved harder as the stereo pulled extra power from the battery and fought back. Soon Howard Jones could be heard no more and the other driver reached for the tuner on his radio. This is the standard sign of defeat. Better luck next time Howard Jones Guy.

Sammy Hagar Knows How Many Ways There Are

And of course, by the end of my day I was feeling tired and in need of a serious hair metal fix. I thought, “What if I rock incorrectly? I know I need to rock, but is there more than one way? If there are multiple ways to rock, how do I know which is best suited for this particular occasion? I could look quite the fool.” I quickly flipped stations over to Hair Nation in search of answers. Luckily, Sammy Hagar’s “There’s Only One Way to Rock” was playing and curbed my anxieties. His message is so simple…

Crank up the drums, crank out the bass
Crank up my Les Paul in your face

Just rock baby! You can’t screw it up!

All in all it was a pretty good trip.  Plenty of tunes.  Plenty of dangerous hitchhikers. If you see me cruising down the interstate sometime, don’t bother sticking your thumb out for a ride. I’ll just scream and drive right past you.